The Roman V for five reminded me of this anecdote which some may find trivial and others may see as something more profound.

It was the time when Vic Garland, the then Opposition whip, was giving the second reading speech in reply to the legislation on the Australia Council Bill. Bill Snedden, then the Leader of the Opposition, was to have given the speech but his wife’s unexpected illness precipitated his early departure from the House that day.

It was an impressive speech, and Vic Garland had an equally convincing delivery. However, there are always pitfalls when the speaker, no matter how impressive his diction, has a basic unfamiliarity with the topic. In referencing the costly purchases of Jackson Pollock’s “Blue Poles” and of de Kooning’s “Woman V”, he said “Vee” instead of five. In Hansard it stays correct, and a mispronunciation was a zephyr wisp drifting across a somnolent chamber. Like Vic Garland, a zephyr comes from the West.

Perhaps Vic would have been somewhat surprised that the speech had been written by Jack Hibberd, the playwright of “Dimboola”, and John Timlin, who was the administrator of the Melbourne based anarchic Australian Performing Group with their outlet the Pram Factory in Carlton. Snedden had read the speech and given it the “thumbs up”. He did not care how either of them had voted. He just agreed with the sentiments in the speech.

Vic might also have been somewhat surprised had he known who the authors were. The words that Vic uttered inter alia may have been seen to be somewhat radical:

I have pointed out that less than 5 per cent of ACA funds have been directed to community arts by the Whitlam Government – a so-called populist crew which rows its fiscal boat to the already well-endowed shores of those few cultural monoliths who have for years fed well on the subsidy cake.

And further on: “To spread available funds widely through the community seems now to be a shared aim of both the Government and the Opposition. A basic requisite then is close consultation with the State directors since these are the people closest in touch with regional local groups. We reject totally the notion that the Council should consist of itinerant and possibly ignorant friends of whatever government happens to be in power.

All parties want our culture preserved and developed. We wish to see diversity of the culture maintained. We wish to see Aboriginal cultural efforts expanded without destroying the intrinsic requirements and tenets of that culture.”

Vic had delivered it well apart from the “Vee”. Hibberd and Timlin, watching on, may have shuddered but in the long term what did it matter? In any event, a month later, Snedden was gone.

Trying to establish policy where the aim is to seek views from all sides of the political spectrum is a tough task, and you lay yourself open to yon Cassius. After all, being the centre should be purple – the place where blue and red mix.

I remember well the judgment by the Coalition backbencher of the Snedden staffer who was seen talking to the young Charlie Perkins around a campfire outside Parliament. “Who is that bloody communist working for Snedden?” Talking to Charlie Perkins. Shock … horror.

Trolls always have difficulty with the concept that my adversary may only be as close as my policy neighbour. Their angst, alienation and ethnic hatred is a bar to anything.

Later Snedden would be a good friend of the Pram Factory in assisting its survival. He was very loyal.

It is strange that when there is a national election, I always think what would it be like if Australia were a Republic. I am a republican, and have been since I was very young. Even though I had a privileged Anglican education, it was always my Irish roots that called me to the Republican cause. I was comforted by the fact that the early great Irish revolutionaries like Robert Emmet and Wolf Tone were Church of Ireland and not Roman Catholic.

I may say I am “committed” but I never joined the Turnbull caravan nor the current Red Bandana Brigade. One reason is that with Elizabeth on the British throne, it is an exercise in futility.

For no reason other than most of the population have known no other monarch and she is such a closed, controlled individual – a metaphor for a colonial lounge room, comfortable, cream coloured walls with flashes of colour in the curtains. The flashes of colour signal how good the British Royals are at pomp. However at the same time, monarchy is a symbol of nostalgic stagnation glossed over as “certainty” – and who expects her to die?

Yet there is a second reason for going easy on my republican stance and that is the Australian election cycle.

The current Australian election campaigns are run as if they are Presidential, but only in style. Presidential substance, however, comes against constitutional barriers, which are impossible to avoid.

We have to ride the carousel every three years to elect a new government. The community finds it hard to keep up the interest at the best of times when elections are so frequent, hence the media attention on the bizarre array of peripheral political buskers.

However, if we removed all the trappings of a foreign monarchy, most politicians would be comfortable with a system where the end point would be “me” as President. Australians would now have a flexible “Republican” constitution, the Presidential hand would be on patronage, the bizarre fringe would be in the government or in an asylum depending on Presidential whim, and I nearly forgot: “pesky” elections would be held once every ten years.

Currently the autocratic President is the fashionable model, a person who alters the constitution to remain in power with a series of coercive institutions to maintain that power. Trump yearns for this power; democracy is a hindrance. When one looks back on the Trump legacy, the end point will have led to the destruction of trust and paralysis in rational policy formation. Government decision-making becomes a game of dice for the rent seekers and mercantilists.

Now if we got rid of Elizabeth, then elections could become real American vaudeville. Roll up, roll up and see the Screaming Circus Strong Man. We sober people are shocked; we avert our eyes from this grease-painted figure.

However, this behaviour does not seem to affect his following any more than stage performers shed their audience. That is a republic!

Trump has an audience. It is only that Trump has an unusual spiel for a politician – he insults and his audience squeal with delight. It is a well known trick of the comic. However, remember, beware the mob that in the end invariably pulls down the figure that it has created.

Maybe our election campaigns freed from our Constitution would become festivals of the absurd – after all, the Italians have Beppe Grillo, a comic who is the eminence grise of the Five Star Movement in Italy; the Ukrainians have just elected a comic, Volodymyr Zelenskiy, as President for the next five years.

Of course nothing like this would happen in Australia, proclaimed the Best Country in the World. Our politicians are serious people. They are not comics; desist, you with your hand on the voting paper, desist from saying anything. Let us not have cheap irony; and anyway the “word” is comical.

So let the republican idea lie for the present.

In three years time when this campaign is all repeated and when the climate is teetering on the edge of the irreversible, when rent seekers and short-term carpet baggers seem to have retained their ascendency, it is only a hope that the electorate as a whole will have at last awakened – listening to the sounds of our descendants, pawns sizzling on the barbecue of climate change. Hopefully Australia would have stopped drawing the Joker from the pack of policy options!

Then in six years, there will be only two words on the election campaign trail – “Water” and “Climate “. Nevertheless, all may not have changed. Hannah Gadsby may be leading the new Social Democrats. Then we can think of a Republic – when it is a necessity.

Tim Fischer is a great Australian. When he looks at you, you feel as though he is peeling away the layers of crap that you pick up in a lifetime of being in the System and seeing whether there is something underneath. He speaks in his own unique argot, but he does not need a translator. You know perfectly well what he is about. 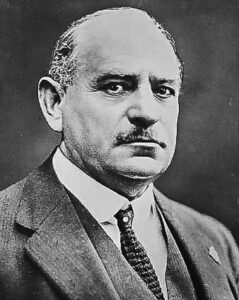 One of his obsessions over at least the past decade is Sir John Monash posthumously being raised to the rank of Field Marshal. Many have attributed this not happening in his lifetime to the fact that he was Jewish at a time when being Jewish excluded you from such institutions as the Melbourne Club and when the Roman Catholic Good Friday liturgy made mention of “perfidious Jews”. In fact Monash had been sent to Scotch College over Melbourne Grammar School because Scotch taught Hebrew.

Another reason was that Monash was “militia” and not “regular army”. After all, “the traditional” Haig insisted on sending the cavalry in to the last stages of the War, notwithstanding that Monash the engineer, because of his technical superiority, had virtually won the War already.

Monash was loved by his troops; to him one Australian casualty was one too many – and in the final offensive which defeated the German army, some of the feats performed by Australian soldiers were extraordinary – frighteningly murderous to Germans in their own way but building upon the stuff of the Australian legend.

I know that Tim Fischer wanted to see the posthumous award of Field Marshal in 2018. He asked Turnbull and Turnbull, as was his wont, deferred the request to the armed forces hierarchy. They said no; Turnbull said “no”.

Fortunately, Bill Shorten was a proponent of recognising Monash. All the obfuscation about not doing so is at the feet of academics and of course Brendan Nelson. Chattering about precedent, one hears the voices: “You know, he never commanded enough men to be a field-marshal; he was only a lieutenant general at the outset of the final campaign” – and on it goes.

The Digger, emerging from the shadows of war, can be heard saying: Mate, he won the War. Don’t give me this stuff about a posthumous award being a dangerous precedent for others to be promoted after they have died. There was only one Monash.

And by the way, there is only one Tim Fischer.

“No matter how rational, logical and ingenious Monash was, there was nowhere to escape the insanity of war. “