Golf puzzles me. However, I do enjoy fluttering around the Masters Golf Course in Augusta on the YouTube bird. A floral pilgrim arboretum with quaint names like Amen Corner and Flowering Crab apple; kaolin coloured bunkers; water courses and ponds interwoven with trees and bushes which seemed to be groomed rather than planted. The spring flowering dogwood, azaleas and magnolias provide a regimented colouration – red, pink yellow and white. The annual Master’s tournament is testimony to that Brownian movement which is America. The winner this year – an epithet for Trumpian America – tiger woods.

In contrast, every time I pass the Rosebery golf course on the West coast of Tasmania, against the mountainside away from the local zinc mine there are abundant green fairways dotted with a mixture of exotic and native trees – just varieties of green. Perfectly groomed but lacking bunkers. Never have I seen anybody playing golf there – not even a Tasmanian devil stirring – it seems a golfing Marie Celeste -an epithet for Canberra at election time.

Lessons from the Memorial Sloan-Kettering Malfeasance

The whole political spectrum is awash with promises of funding for cancer but it is nigh impossible to predict the expected outcome from the actual outcome. The ALP seems to want to provide money for patients whereas the commitment on the Coalition side seems to favour research.

The current Australian election campaign is awash with promises to tackle cancer. The time-honoured political response is to promise more money for research – however it is dressed up. Politicians have always seen cancer funding as a vote winner – they can provide funding without strings and bask in the immediate kudos.

Therefore, the recent Memorial Sloan Kettering Institute disclosure is something to make everyone pause. This institute is prestigious, shorthand for “above reproach”. I have actually visited this sprawling but unremarkable bastion of cancer treatment and research on the East Side of Manhattan.

The New York Times has been progressively reporting what one may describe as “malfeasance” – corruption seeping through the upper echelons of the Institute.

The heart of the matter as reported by the NYT is that fact that “scrutiny of researchers’ stakes in start-ups has intensified at a time when venture capitalists are betting millions of dollars on the next potential cure for cancer and when expensive treatments like immunotherapy have fueled public concern over rising drug prices.”

As reported in the NYT, a review, conducted by the law firm Debevoise & Plimpton presented a week or so ago concluded: “that officials frequently violated or skirted their own policies; that hospital leaders’ ties to companies were likely considered on an ad hoc basis rather than through rigorous vetting; and that researchers were often unaware that some senior executives had financial stakes in the outcomes of their studies”.

There has been a great amount of public soul searching, but it seems that despite the list of questionable activities at the Institute most if not all those with fingers in pie have survived and the cosmetic changes and promises to do better have not been matched by deeds. The excuse is that culture change takes time, but when the direction of research becomes a branch of a hedge fund, then in the long term the effect is that of a “warm lettuce leaf” sanction.

However, when the scandal emerges in a leading institution in USA, it is reasonable to assume it is not an isolated example. The problem is that anything to do with health is now a business and health is just one commodity on the sprawling profit and loss sheet. Aiming to save lives in the most effective manner – an incidental – is met with guffaws by this coterie. So let the policy makers shed the faux Pollyanna approach to research funding, knowing how difficult it is to remove emotion from any decisions – hence this is an area where any policy makers worth their salt should follow the money trail – and hopefully not end up finding a Memorial Sloane Kettering Institute at the end of the trail.

Howard Florey, our greatest Australian, the man who gave penicillin to the world would have shaken his head in disbelief. He never benefited from the discovery; never made a buck out of a drug which saved millions of lives but ironically changed the fortunes of the pharmaceutical companies who picked up the patent.

After all, infectious diseases were the cancer equivalent of the day. Lest we forget.

Cancer is multifactorial; it is an expression of everyone’s mortality.

We, the patients have to bear the brunt; and given the mortality surrounding cancer that brunt is so often deadly.

Pancreatic cancer in particular has a five-year survival rate of 7-8 per cent; and that is survival not quality of life.

Some unfortunate people get multiple cancers – just not metastatic spread. Many cancers are terminal. Treatment is surgical, radiation, or chemotherapy – cut, irradiate, poison. There is nothing pleasant about cancer; and if you emerge from this experience and are presented with a huge bill then it adds to the unpleasantness.

One approach to alleviating the burden of cancer is to improve the funding of the actual care, and that seems to be at the heart of Shorten’s stance. Minimise or eliminate the out-of-pocket expenses. However, apart from waving a few figures around, the implementation is just that – short on detail.

There are number of matters which need to be balanced – the Medicare benefit the government is prepared to pay and the fee the doctors charge. The figure of $150 has been mentioned as some extra payment. What does that mean?

Inevitably as one grows older, one is faced with the prospect of surgery. As a privately insured patient, I always ask what will the whole business arrangement known as “operation” cost.

What is the price? How much will that vary from (a) the MBS benefit (b) the amount guaranteed by my level of health insurance? The surgeon is responsible for the whole episode including post-operative management no matter to whom he or she may delegate it.

Then there is the surgical assistant – often a supernumerary – but who has to be costed in and someone the patient probably never sees. “Is that person necessary?” is the obvious question.

The same occurs with pathology – the pathologist is rarely seen – and diagnostic imaging, where the patient may see somebody vaguely resembling a radiologist.

Then there is always the matter of complications to be factored in and therefore the total cost before anything else needs to be agreed. The patient should not have to bear all the risks.

Similarly there needs to be a price put on the radiotherapy or chemotherapy, with may occur in association with surgery or independently.

Then there is the unknown – the cost of palliative care. Unless, you the patient are demonstratively terminal, it is not something the average cancer patient wants to think about. But nevertheless it entails a price; dying from cancer is not cheap.

When you buy a house, you don’t buy it room by room. Therefore, for that purchase knowing what you do, what your entitlements are and then negotiating from a solid basis breeds a degree of certainty. If you as the buyer feel this task is all too daunting you get someone you trust with the appropriate knowledge to do it for you.

Buying a property and assuring health are no different in needing a broker than any other commodity.

Now try and translate that into what the political parties are suggesting as health policy. This area is complicated by the current review of the Medicare Benefits Schedule, which has been going along for four years but with an end point in creating a new MBS schedule without putting any value on any of the items. Alice may well be asking where is the tea party.

Yet the ALP has a proposal putting finite values on patient reimbursements and injecting them into health care financing. Pluck a figure from the policy teapot to give to the patient as an added benefit, and the market may absorb that benefit and the price for the service commensurately rises.

The current state of affairs is not the best situation in which this policy initiative is being put forward – private insurers put up their premiums, doctors charge what they believe their services are worth or what they think the market will bear, the central agencies of government hover to squeeze the value of the benefits.

Let us set out a premise. Once diagnosed, cancer treatment in our affluent society should be cost free to all. Having made this statement it is tempting to think that premise too fanciful. However that is the challenge and just throwing a consultation benefit or subsidising one piece of equipment to the exclusion of others does nothing to solve the problem.

It would be useful if the patient could choose a one-year or five year survival package with named participating doctors, health facilities and health insurers who would accept the package based on the mean expected survival. The actual projected expectations should balance out the assumptions underpinning the package. The assumptions should be made clear. Work on the basis that whatever figure, however fair and reasonable will be inevitably wrong; so err on the side of generosity.

This is not fanciful – there are arrangements where surgeons label them selves as “no gap” when linked to particular hospitals with arrangements with health insurance, but it is patchwork – sometimes quite attractive patchwork.

However, it does not absolve government, and when politicians enter funding for cancer, there should be a plan to give the cancer sufferer a non-transferable amount of funding either in a one or five year package according to the expected price of such service – realising that currently MBS benefits provide a de facto floor price – the public hospital provides a guaranteed government funded place. Private hospital insurance premiums and the AMA list of recommended fees provide the other end of the price spectrum. Work between those two limits and determine the fund holder. In the end if information were symmetrical it should be the patient and his or her family, however defined.

The resultant cost accounting exercise should not be beyond the wit of a smart bureaucracy. Absolve oneself from the clutches of the external consultants to do the work. Have a team dedicated to the task – not as happens all the time continually shift the bureaucrats around to destroy any continuity and thus disrupt the timetable.

Do not let the work of this well-intentioned attack on cancer meander for years. Have a very concise timetable – three to six months. There is enough information. It is a matter of distilling the options. Go to it. 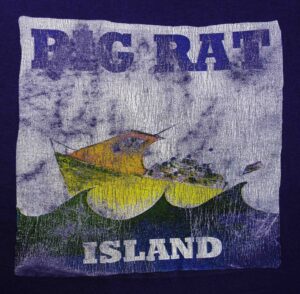 “Whose idea was it to change the Island’s name? Totally inappropriate! Kerr was not big.”

“But you forget the top hat, mate.”